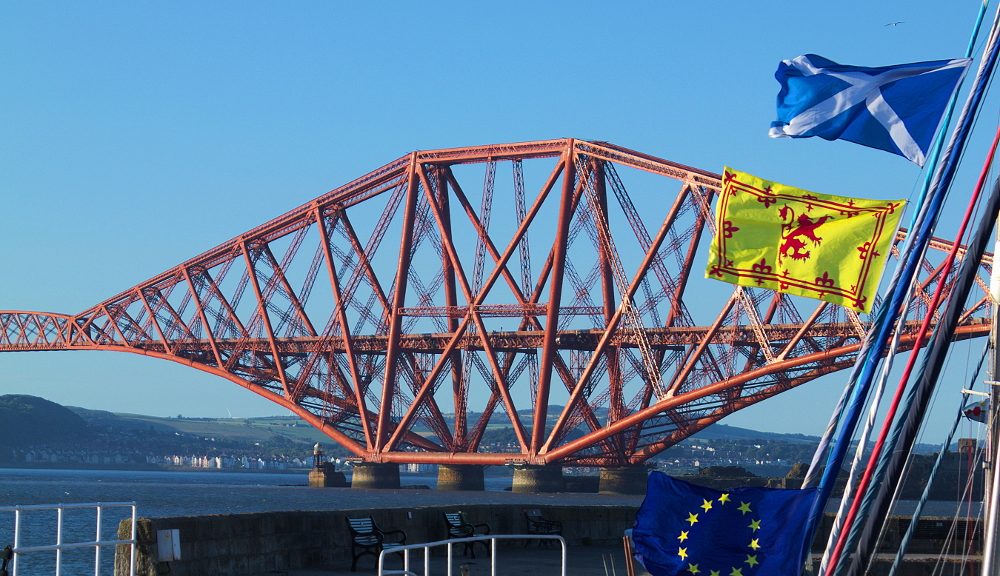 One of the few reasons for genuine regret over the resignation of Boris Johnson is the body blow many think it might deliver to the independence campaign. Of course, there’s little doubt that having a walking cartoon of upper-class failure at the head of government was a fantastic billboard for the need for change. BJs eventual departure might well do more for independence than even the most blunderingly corrupt PM the country has seen so far.

Of the candidates competing for the job, none have been able to show as much as competence in their current government roles. In a staggeringly short time, several of the various offices of government have been found to have repeatedly broken the law, disregarded their own international negotiations, and forced to stall, backtrack, and retread ground for a semblance of forward progress.

Yet, despite the Pincher, Partygate, Paterson, Refurbishment, Windrush, social distancing procurement, bullying and prorogation of parliament scandals that have plagued the current government in reverse order—the specific disgraces of the current government is less of a push towards independence than the general direction that it’s taking.

The State of Play Today

Before being slowly forced to resign on a summer-long wind-down, the current PM appeared to be actively pursuing a policy of disregarding science, wilfully ignoring the law, and avoiding forward progress and change at all costs. Nowhere was this more sharply focused than the pandemic response and, more importantly, the months that followed.

In the face of a once-in-a-century disaster, the political opportunity and will were there to make the kind of impactful changes that would have been hard to dream about in 2019.

Bolstering the NHS, for example, after a period of unprecedented hardship and well over a decade of neglect might have proven astoundingly popular with voters, bought handfuls of goodwill and proven to be a common-sense idea for public health. Instead, Rishi Sunak’s budget opted to slash services and support even further still.

Amongst the further opportunities for change, the open goals begging to be scored with even minimal competence, some of the policies that the government could have pursued include:

Even today, as fuel and energy prices spiral upward, the government is committed to reversing this hybrid office trend and getting people back on the commute.

Both the PM and the UK government have this strange quirk of pursuing policy and rhetoric as if the real world and its crises are something that can be opted in and out of freely. Yet, even this isn’t a defining reason pushing me towards independence. Celebrity ministers and sitting governments are relatively temporary things eventually forgotten (even if they do last more than a decade).

What’s far more remarkable, and the biggest factor driving me towards a yes vote for independence is that it’s not just the government taking this bizarre approach, it’s one the opposition are also readily adopting too.

If things were even marginally less broken, we’d have an opposition repeatedly battering the government over one failure after another on the back of over a decade in power. With nowhere to hide from disastrous campaigning and decision making public support for the opposition should be overwhelming bordering on rabid.

Yet, of the policy decisions mentioned here, the Labour opposition can scarcely bring itself to criticise the majority of them. The suggestion of policy and direction of their own is still deafeningly silent.

With the PM and allies publicly cajoling and humiliating public servants back into the office why don’t we have an opposing party capable of pointing out a catastrophic cost-of-living crisis, near-unprecedented transport strikes, and previously unimaginable fuel prices?

Imagine if they could suggest new ways of reducing unnecessary travel, cutting fuel use, and acting in the best interest of the public and climate at a time when the front-running candidates for Prime Minister are publicly rolling back climate change commitments.

During a time when the economic outlook for the UK is uniquely bleak, the opposing party in Westminster seems reluctant to do as much as criticise the Government’s now self-admitted shambolic Brexit deal and plummeting worldwide reputation.

Imagine, just for a second, if they campaigned on opposing this catastrophic damage.

Perhaps most remarkably, having left the role as director of public Prosecutions, Labour leader Kier Starmer has neglected to act on a badly broken and rapidly failing criminal justice system while barristers strike for action.

Simply returning to the required level of funding for the existing criminal justice system is the simplest pledge imaginable and one that would right a deeply troubling trend. The term ‘open goal’ doesn’t quite cover how simple it should be for a halfway principled opposition to hold the government to account. Yet, for years, this simply hasn’t happened.

It’s impossible then to direct all the warranted criticism solely at the government. In addition to levels of corruption, incompetence, and ambivalence rarely seen outside of cartoons; we’re suffering from an opposition that can scarcely align and agree on its own internal values, let alone external policy or action.

That any of the current crop in Westminster’s front benches have been elected at all is a real and current problem that speaks volumes about the failures of our electoral system.

We’ve discussed before better ways to hold elections than the FPTP system we use today. Put simply, we’d be better off with almost any other system of electing representatives.

While changing the way we vote is far from a cure-all solution that rids us of useless politicians, it’s one of the key pillars propping up a bizarre stage show and something that indicates a much wider problem beneath.

Why is FPTP a Reason for Yes

One of the most important things often missed about these kinds of fiery hot-button political issues is that they’re not life-defining for 99.9% of people. I’m a yes voter today and I was in 2014, but I’m in no way a yes-at-any-cost voter or campaigner.

I’m entirely sympathetic to the argument towards campaigning for change within our current system. It would almost certainly be preferable to improve the UK as a whole to create a better, more modernised, and forward-looking political system that serves four member states well.

What we’ve learnt in the last decade, however, is that this is just too much to ask. It’s more than just an uphill battle, in the face of Brexit, successive failed governments, and an unwaveringly incompetent opposition—it’s impossible. It’s designed to be that way.

It’s no coincidence that the government and opposition have been made up of the same groups of people spread across two parties for well over half a century. Asking any parliamentary group to look towards some noble idea of common good, repair a broken system, and effectively retire themselves, their parties, and their ideas out of one of two seats of power in the interest of positive change is barely short of lunacy.

Now, we have abundant evidence for this in the 2011 referendum on Parliamentary voting. A vote that came about as a political deal in return for a Lib-Dem and Conservative coalition government when then PM David Cameron agreed to the UK’s first referendum of the 21st century.

A campaign pledge of the Liberal Democrats, the vote was designed to prompt much-needed change to our elections. The agreement struck between the two parties became a yes/no ballot on whether the country should represent first-past-the-post with Alternative Vote.

The most interesting thing about this ballot by far isn’t who took each side of the debate but the choice of AV itself. While it’s undoubtedly more representative than first-past-the-post, it falls absurdly short of being the fairest or most representative system available.

Single transferable vote (STV), for example, is already used throughout the UK and provably delivers more local representation and a result more closely linked to voter preference. The only thing it can’t do is create a two-party stranglehold on national politics.

Think about that for a second. Is it the case that government advisors, experts, and consultants were unaware of the flaws in AV, or a better way to deliver a more representative parliament? If substantial improvement was the genuine end goal then you’d have to conclude a staggering amount of incompetence that would be impossible to comprehend. Of course, if you conclude a lack of care, interest, and decency then the conclusions are much easier to understand.

The inescapable conclusion is that this isn’t a parliament that is working hard to find the best way to improve criminal justice, the best way to distribute and maintain high healthcare standards, run effective prisons, manage immigration, social security, or voting. There are no defined goals or ambitions to change very much of anything at all.

Stuck in a Rut

AV was chosen in 2011 as a pig impossible to get behind and designed to fail. The result, when it did come, means many many more years of maintaining a system propping up two equally intolerable parties with barely a single policy or idea to separate them.

Of course, this ambivalence to change is nothing new to the UK. The previous government was equally culpable of covering their ears to science and pursuing an aggressive chase of the status quo. A chase that was abundantly clear in the public firing of policy expert professor David Nutt when the academic publicly shared his research demonstrating the countries drug laws and enforcement were an utter failure of science, reason, and common sense.

That these laws were, and still are, actively doing harm and putting people in more danger rather than less was evidently irrelevant both then and now. Publicly sharing this information was clearly the much bigger problem.

A Reason for a Yes Vote on Independence

It’s no longer even possible to pretend that even a significant minority in power are working for any real change or improvement in any meaningful way. They’re not going to act against their own best interests. They’re not even going to act in the interests of the electorate. They don’t have to. They can maintain power and the way things are just fine and make a nice amount of money doing so.

One of the major reasons I’m voting yes is because these are badly broken systems with no realistic possibility for change.

Of course, not a single one of the issues mentioned here are necessarily solved by independence. Even of those that are—it won’t be done overnight. It would be almost trivially easy for an independent Scotland to fall into many of the same traps, elect the same kind of slogan-toting eejits, and follow many of the same patterns we’ve seen before. But there are key differences.

My independence vote should never be mistaken as a vote for the current or the next Scottish Government. Instead, it’s a vote out of the broken system of parliamentary stalemate, vested interests, and worthless dogma we currently find ourselves in.

Our current parliament is already making these differences by having a modernised design, a voting system fit for purpose, and a minority of progressive MSPs that can make a genuine and lasting difference—given the chance. I’m voting yes because it’s an opportunity to put a vote where it can genuinely make an impact for the first time in my 30-odd years.